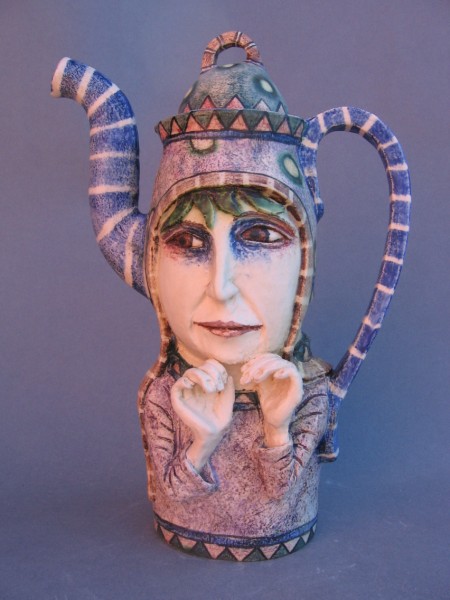 Title:  'Lady' Teapot
POA
Description: Ceramic
Artist: Amanda Popham
Profile: Amanda Popham was born in London 1954 and attended Bradford College of Art 1973-74, Portsmouth Polytechnic Fine Art Dept. 1974-77 and the Royal College of Art 1977-79 'I started selling work through Liberty in Regent Street in 1979 while still a student at the R.C.A., a relationship that continued until the closure of the British Crafts Room in 2001, and included a one woman show in November 1984 and several smaller showcases over the years. During the 80s and 90s I showed regularly at The Portal Gallery, Grafton Street, Cecelia Coleman, St. Johns Wood, Fitchs Ark, Little Venice, The Laurimore Gallery, Boxford, Suffolk. In 1981 we moved from London to Dorset and for the next 10 years combined making ceramics and looking after my three children with building a house. In 1995 I won the Inax Design Prize for Europeans and spent three months at the Inax design studios at Tokoname, Japan making my own work using Japanese materials and immersing myself in the whole experience. In 1996 I did a teaching qualification and was accepted as a member of the Devon Guild of Craftsmen. Through the Devon Guilds Big Hand Little Hand scheme I lead short residencies at secondary schools in Devon. I also teach an adult education evening class'